Evening buses on these services fell victim to the County Council's cutbacks in 2016 but will now return following the award of £34.6M to the council to implement parts of its Bus Service Improvement Plan made under the National Bus Strategy for England.

Timetables on each service are similar to those that operated up to 2016 with services extended until after 2300 hrs six night a week.  Further enhancements are due on the 42 early next year when additional Sunday buses will be introduced as part of an overall review of services on the A6 south from Lancaster.

The Council has allocated £3.9M of its BSIP gant to bus service enhancements in the period ending March 2025 although at this stage no more Lancaster services are earmarked for improvement.

There has been no advance publicity for the changes by either Stagecoach or the County Council due to the grant funding still not having been fully confirmed by the government, but a decision has now been taken to go ahead in the expectation that funding will soon be in place. The Bus Users Group is therefore pleased to be able to break the news and hopes that as many people as possible will find out and be able to make use of the new journeys. 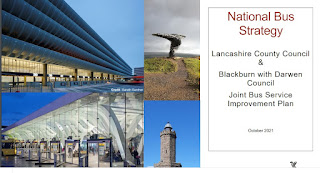 As required under the National Bus Strategy, Lancashire's Bus Service Improvement Plan has now been subjected to its first annual review. The objectives of the Plan remain unchanged, but the document now contains details of how the £34.6M allocated by the Department for Transport (DfT) (out of a bid of about £170M) will be spent in the period up to March 2025, which is as follows
In addition to the above, Lancashire County Council and Blackburn-with-Darwen Council have identified a further £16.7M for bus service improvements from their own resources, other funding sources and developer contributions.
The updated Bus Service Improvement Plan is on this link
Posted by Jim at 11:05

The next meeting of the Bus Users' Group is on Thursday, 16th March 2023 at 14.00hrs at Lancaster Library. Special Guest Speaker: Roger French OBE, well-known former bus manager and now commentator on the public transport industry and writer of the Bus and Train User blog.
FIND US ON FACEBOOK
Our Facebook Page