There's a well-known saying that goes: "You wait ages for a bus...and then three come along at once." Now it seems the same thing is happening to fares reductions, although you could be forgiven for not knowing.

On 1st January, as part of a government scheme, all single bus fares were capped at a maximum of £2 per single journey. It's fair to say that there was some publicity about this from the government, whilst the Bus Users' Group also did it's bit to promote the scheme.

But now, we hear that two more fares initiatives, this time confined to Lancashire, are to start this Monday, 30th January as part of Lancashire's Bus Service Improvement Plan, but publicity for these is even harder to find.

This is what we think we know:

The only excluded journeys we can immediately think of locally are on service 555, where the £1 fare would only take you to the county boundary and not to Burton-in-Kendal or beyond, although we are unsure whether it applies to the full route of services 81 and 82, including the short section between the county boundary and Kirkby Lonsdale.

Bus services operated by Blackpool Transport aren't included, except the 74 and 75 that are operated under contract to the council, but we are assuming that the £1 fare will be available on evening buses in the Blackpool area that are run by other bus companies, such as Stagecoach's 42 to Lancaster.

This is a bit more complicated as there is an inconsistency in information across websites we have consulted, but what we think it involves is that if a bus operator offers a day ticket, such as a Day Rider,  any ticket you buy on Saturday can be used again on Sunday.
Locally, that means a Stagecoach Day Rider for The Bay Area, or a Lancashire Day Rider bought on a Saturday can be used again on Sunday. Effectively, if you buy the ticket on Saturday you get a Sunday's travel free!
Lancashire County Council's Day Ticket for supported services is also included in the scheme, but the 89 Lancaster to Knott End has no Sunday service, meaning that the only buses it can be used on are Kirkby Lonsdale Coach Hire services 81 to 82 to Kirkby Lonsdale and even here it's not clear whether the last few hundred metres into Kirkby Lonsdale, which is in Westmorland, are included.
Nowhere does it say whether or not the ticket has to be used by the same person on both days, but as in practice it's impossible to check that we'll assume it can be transferred.
The new initiatives are, of course, welcome, especially as they will run at least until March 2025. This will give them time to become established and known-about, unlike the temporary £2 fare cap that ends on 31st March 2023.

Read All About It (Not!)

To say that these schemes were outlined in the Bus Service Improvement Plan of October 2021, publicity for them has been very last-minute and minimalist in scope.
The County Council issued a press release today (27th January) and there are brief details on  the "Bus Service Changes" page of its website, which might not be your first port of call for news of fares reductions.
At the time this post first appeared there was nothing on Stagecoach Cumbria & North Lancashire's website, although the following is now shown under "service updates" New fares initiatives in Lancashire This confirms the range of day tickets included in (and excluded from) the scheme but note that the "Bay Plus" ticket zone referred to no longer exists!
Both the LCC and Stagecoach websites have confined their efforts to "providing the information" (if you know where to look for it) rather than trying to actually sell the initiatives to the public.
There is nothing on Kirkby Lonsdale Coach Hire's website and a quick trawl of other Lancashire bus operators' websites also drew a blank apart from Transdev, who are promoting the evening fare (which has been in operation for some time there) but not the weekend offer.  Perhaps everyone is waiting until the government's £2 fare cap finishes in March to do something, but there really is no point in having offers like these and then not telling anyone about them!
It is, we suppose, somewhat of an achievement to get most of the county's bus operators to join in a single initiative, and we hope it is a small step along the road to developing what is really needed in Lancashire, and elsewhere: A single ticket, or range of tickets, that can be used throughout the area on every bus, irrespective of who operates it. Now that really would be "Enhanced Partnership" working!
Posted by Jim at 16:12

Bus Station Information - The Good, The Bad and The Ugly.

A quick visit to three Lancashire bus stations recently showed a wide disparity of approach in providing people with information about bus services in a form they can take away with them and consult at their leisure without need of a data connection, a battery or even a PC or 'phone:  The printed timetable leaflet. 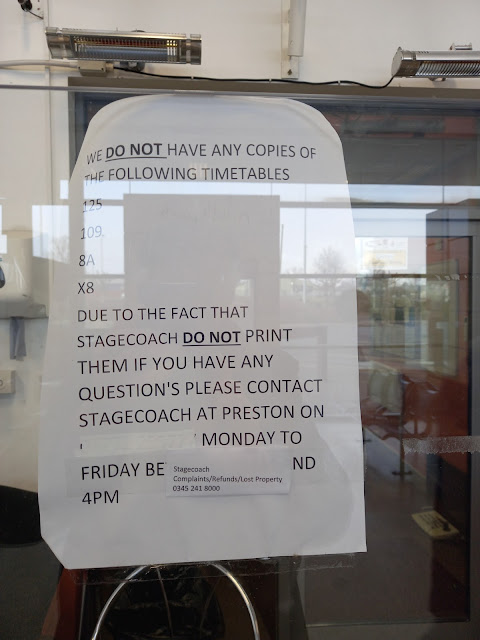 Chorley bus station is operated by Lancashire County Council.  There is an information desk on the concourse, which at the time of our visit was apparently unstaffed (or at least, none of the staff were visible), and the only immediately available information was the above notice fixed to the plastic screen that separates customers from staff, or would do if any staff were on duty.
Stagecoach please note:  No one would go to the trouble of making and sticking up a poster like this if they weren't fed up of people constantly asking them for something they haven't got - printed timetable leaflets!
It's possible that timetable leaflets for Blackburn Bus Company's service 2 to Blackburn and for the various services operated under contract to the county council were available, although there was no evidence of this - and no one to ask, so we can't be sure.

Things were much better at Blackburn, where the newish bus station is operated by Blackburn-with-Darwen Council. 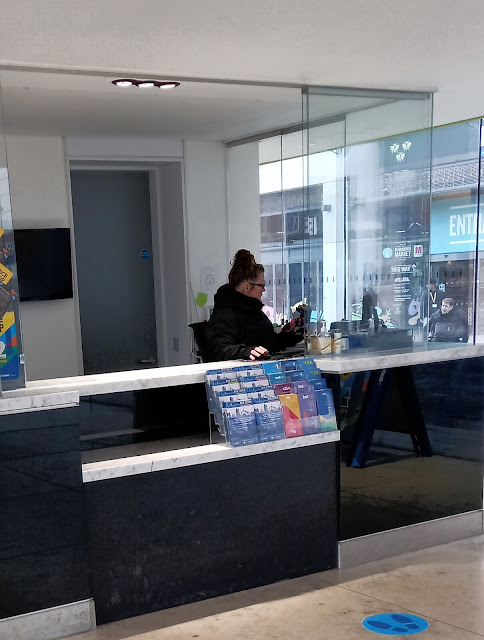 Here, there was an enquiry desk with a staff member waiting to assist and no barrier to keep the customers at bay, plus a fully-stocked, help-yourself leaflet dispenser with timetables for all services readily available. An excellent example of how things should be done.
Meanwhile in.... 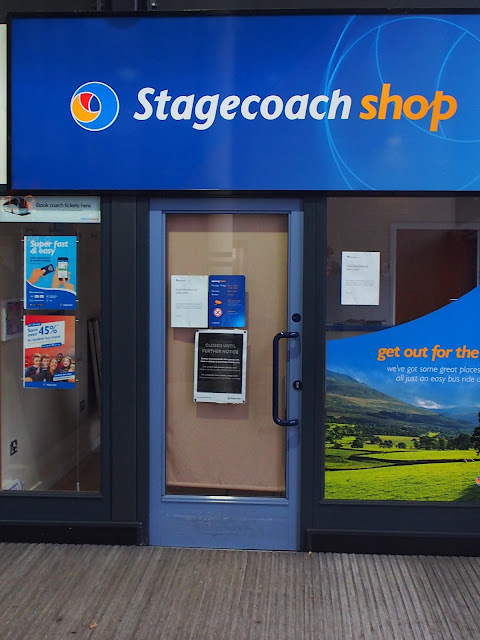 Despite our branch of Stagecoach being one of the few to still produce timetable leaflets they are not easy to come by and certainly not from the Travel Shop, which closed at the start of the Covid pandemic, never to re-open.
We are told that if you can find an inspector - and if you ask very nicely - they might just delve into their secret cupboard under the stairs in their office and get one for you (but don't tell them we said so!)
The Good, The Bad and the Ugly....we'll leave you do decide which is which!
Posted by Jim at 17:22

The next meeting of the Bus Users' Group is on Thursday, 16th March 2023 at 14.00hrs at Lancaster Library. Special Guest Speaker: Roger French OBE, well-known former bus manager and now commentator on the public transport industry and writer of the Bus and Train User blog.
FIND US ON FACEBOOK
Our Facebook Page