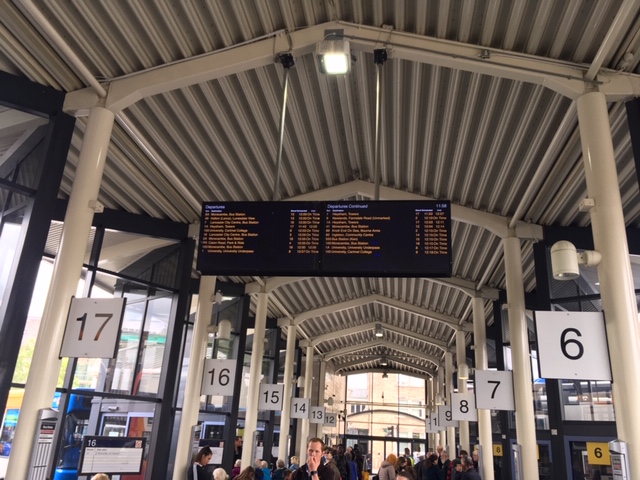 After a long-running campaign, during which we had almost given up hope, the ongoing problems with the information shown on Lancaster bus station's electronic departure board have now been solved.
The issues with the display concerned not the times and service numbers, which were accurate, but the destinations shown alongside them, which were often unhelpful and sometimes downright misleading.

In the former category were the local services to places such as Vale, Ridge and Marsh. Stagecoach considers these to be "circular" services that have no outer terminal. The computer system that powers the display board is set up to display the destination of each service, so as these services have only only one terminal - the Bus Station itself - that is where it considers they are going, and that is what it showed.
Some destinations shown could be considered over-helpful. There should be no doubt in anyone's mind about where exactly in Preston the service 40 buses at 09.05 (top left, above) and 10.05 (middle right) were going!

Other entries were positively misleading.  The screen above shows two departures on service 42, both at 10.10. One from stand 4 and one from stand 6. Both are apparently going to Garstang, although only one of them to "Bridge Street".  The reality, of course, is that there is only one service 42 departure at 10.10 - and it goes to Blackpool!
Another oddity concerns the 555.  As everyone knows, the 555 goes to Keswick as it has done for many years. The display board - or rather the system that drives it  - took a different view:
We first wrote about these problems in October 2016.  Much of the difficulty in getting things put right lay in our inability to pin down exactly who was responsible for what when it came to the display. The screen itself was funded by United Utilities as part-recompense for putting half the bus station out of action during extended civil engineering works to install a storm water holding tank underneath it. It replaced a previous system switched off by the County Council to save money.
Operation of the system was then taken on by Lancaster University's IT department, again with some funding from UU. The timetable data came from Stagecoach or Lancashire County Council via the Traveline National Dataset.
Many of the problems developed after Real Time or "Live Time" information was added to the display, although this was also after the United Utilities funding had run out, which seemed to herald a period of uncertainty, at least as far as the BUG was concerned, as to where responsibility for the content of the display actual rested.
But behind the scenes, work has been going on to improve matters, co-ordinated by BUG member Jon Sear and this work has finally borne fruit. Working with Stagecoach, a way has been found to resolve the problems with the circular services, which now go to recognisable destinations, rather than to the Bus Station. The issues with the 42 and the 555 have been resolved and most destinations shown on the screen now match what is shown on the front of the bus.
Work is in hand to further improve the destination shown for the 555 so that "Keswick" can be shown in full, this being delayed apparently because, unlike all the other services, it is operated by Kendal depot.
The County Council will also need to correct the info for service 8 (not shown above and not a Stagecoach service) which still goes unhelpfully to "Lancaster City Centre, Bus Station" rather than St. Chad's via Ryelands.
The screen will never be perfect. The GPS system used to identify bus locations to provide the Live Time data isn't accurate enough to detect when a bus isn't on its designated stand, so passengers will still have to keep their eyes and ears open for the all-too-frequent last minute changes, but its all a big improvement on what was there before.
A few minutes spent in the bus station will show anyone just how many passengers make use of the screen and how much they value it so the Bus Users' Group would like to say a big thank you to everyone at the University and at Stagecoach for putting it right.
Posted by Jim at 13:05

BUS SERVICE CHANGES IN OCTOBER 2021 From Sunday, 3rd October: Services 1/1A Heysham - Lancaster University and Services 4/4X Railway Station - Lancaster University - The full University Term Time timetable will come into force with extra buses on Sundays and weekday evenings. Service 51 Carnforth - Silverdale: All journeys (in both directions) will operate the loop via The Row and Red Bridge Lane in Silverdale in a clockwise direction so that ALL buses will stop on the same side of the road directly outside Silverdale railway station. Service 555 Lancaster-Keswick The journeys that run via the M6 are withdrawn for the winter on Monday to Friday. The Saturday journeys continue until 7 November.

The next meeting of the Bus Users' Group is on Thursday, 18th November 2021 at 14.45hrs. Meeting place to be confirmed.
FIND US ON FACEBOOK
Our Facebook Page