Following the third national Coronavirus lockdown in January, bus services were once again adjusted to take account of reduced demand for travel. Stagecoach moved to "School and University Holidays" times on 11th January and two weeks later implemented far-reaching revisions with many Lancaster local services halved in frequency and some services being suspended altogether.

For the first lockdown - and the service cuts that followed - Lancashire County Council, which is responsible for bus stop displays throughout the county,  chose not to post the new times in its bus stop display cases, even those at Lancaster Bus Station, saying that this facility was "suspended" due to the pandemic. Updating of the cases resumed in July when a large number of new services started operating under contract to the council.

Back in March, 2020 Stagecoach responded by posting temporary timetable displays at the Bus Station, but all they could make available were low-quality internal timetables that .were not designed to be read by the public, who are now more used to departure lists of buses rather than full timetables. To make matters worse, the flimsy paper documents were suck to the outside of the display cases with sticky tape, all of which made it very hard for the public to find out when their bus might depart.

Enquiries by the Bus Users' Group established that there had been no communication between Stagecoach and the County Council as to how information might best be provided to passengers.

Council-supported services were not affected by the service cuts and, just as in March 2020, the county council did not update its publicity displays following the two rounds of service changes in January, meaning that they continued to advertise many journeys that were no longer operating.
Initially Stagecoach reintroduced its low-quality printed timetables on the outside of the display cases in the bus station, although the stands used by city's busiest services, the 1/1A, 2X and 100 that link Heysham, Morecambe, Lancaster and the University, did not receive temporary displays and continued to show incorrect times.

The Bus Users' Group prides itself on its good working relationships with bus operators and councils and also firmly believes that the best way to get a job done is to go directly to the people who actually do it.
So rather than make a song-and-dance about the lack of imagination and co-operation between the parties responsible for keeping the public informed, we had a quiet word with the staff actually in the bus station and asked that
a) could all the affected stands have temporary timetables please;
b) could they perhaps find something a little easier for people to read and understand and
c) might it not be a bad idea to put the displays inside the cases!
It seems we were pushing at an open door. The only reason new displays for  the 1/1A, 100 etc hadn't been produced was that in the format used for other services the resulting displays were too big for the cases. Our approach had prompted those responsible to come up with a revised format, which was more like that used by the County Council and which easily fitted the cases.
The only reason the temporary displays were on the outside of the cases was that no one at Stagecoach had the necessary bespoke Allen key to open them, but after we offered to lend them ours, a suitable key was found. 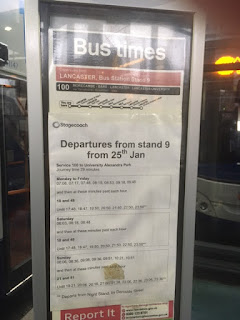 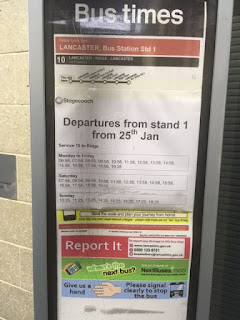 Easier to read displays produced at the bus station and placed inside the cases!
In an ideal world it shouldn't be up to the passengers to suggest that up to date information should be provided at bus stops, but we are grateful to the Stagecoach team at the bus station for responding so promptly and effectively to our "suggestion", which has been replicated at Common Garden Street
Now all we have to is find a way to get the rest of the District's stops done, although we do understand that the County Council is likely to re-start its operation on or around 12th April, when many movement restrictions are due to be removed and, hopefully, more people start travelling.
Posted by Jim at 15:41

CHANGES IN APRIL 2021
EASTER SERVICES: A Sunday timetable will operate on all services on Good Friday, 2nd April and Easter Monday, 5th April
Lancaster Park & Ride service will resume operation on Monday, 12th April.
Stagecoach service X8 (Chorley-Keswick) will have an additional stop at Caton Road Park & Ride when it re-starts on Saturday, 17th April for the summer season. Click here for timetable
Temporary Service Changes (Stagecoach only)
Changes in other parts of Lancashire

The next meeting of the Bus Users' Group is on Thursday, 15th May 2021 at 14.45hrs. The meeting is being held by Zoom.
Members will receive a link to allow them to join.
FIND US ON FACEBOOK
Our Facebook Page