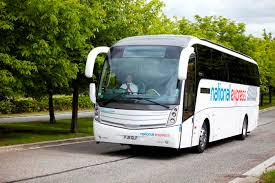 UPDATE: This service no longer appears on National Express' website and has apparently been withdrawn.

...or, rather, the coach.  Just before lockdown, in early March, National Express withdrew the last of its routes serving Lancaster, leaving the city without a long-distance coach service for the first time since long-distance motor coaching began. At about the same time Megabus, which served the University, but not the city centre, also ceased its operations.

But a chance discussion at a recent BUG committee meeting led to the discovery that both operators are once again serving our area.  We must admit that we don't know exactly when this happened.  Long distance coach services do not require any formal notice to operate and can come and go as operators see fit.  Both these compnaies choose to publicise their services and sell tickets solely over the interent. This is all very well and the information is relatively easy to find -  if you already know it is there!  The continued closure of the Travel Shop at Lancaster Bus Station means that it isn't possible to ask anyone there about coaches, but there is no gaurantee that they would have any information either.

National Express and Megabus are presumably happy with this operating model, but we doubt that we are the only Lancaster residents unaware of the return of long distance coaches to the city.

Unfortunately, the services now operating are a lot less useful than those we previously enjoyed, although the National Express website suggests that services are being gradually increased so improvements may follow.

National Express provides one journey per day between Birmingham and Edinburgh, calling at Lancaster at 11.55 northbound and 16.10 southbound.  Although the route serves the National Express hub at Birmingham, the northbound coach leaves at 07.30 whilst southbound it arrives at 20.30 meaning that it offers few, if any, useful connections to anywhere else.

Lancaster is served by the London to Glasgow service, although the only stop locally is at the University and the city centre isn't served.  The northbound bus runs overnight,leaving London at 22.30 and reaching the University at 04.00 before continuing to Glasgow, which is reached at 06.30

In the opposite direction it's a daytime service: 11.00 from Glasgow and 14.05 at the University continuing to Preston, Manchester, Birmingham and London, which is reached at 22.10

Because of the user-unfriendly way Megabus presents its services online it's not possible to link to an actual timetable. You just have to pretend you want to buy a ticket - and start the purchasing procedure -  before you can find out what's actually on offer!  But here's a link to their website.

Disclaimer:  These services can come and go without formaility or notice to the public and the Bus Users' Group cannot guarantee the accuracy of the information or how long it will be current.  Good Luck!

CHANGES IN OCTOBER 2020
26th - 30th October 2020
Service 89: Lancaster - Knott End - temporary changes to connecting service to Blackpool. No change to service 89 itself. Temporary timetable here.
CHANGES IN NOVEMBER 2020
From 2nd November the Winter timetable will be introduced on service 555 Lancaster - Keswick. The extra Saturday journeys via M6 will cease. This year, the Sunday service will not change for the Winter period but one extra journey between Kendal and Lancaster via M6 in each direction will be introduced.
New times here.
Temporary Service Changes (Stagecoach only)

Meetings of the Bus Users' Group are suspended until further notice. Members will receive regular newsletters to keep them informed of developments.
FIND US ON FACEBOOK
Our Facebook Page