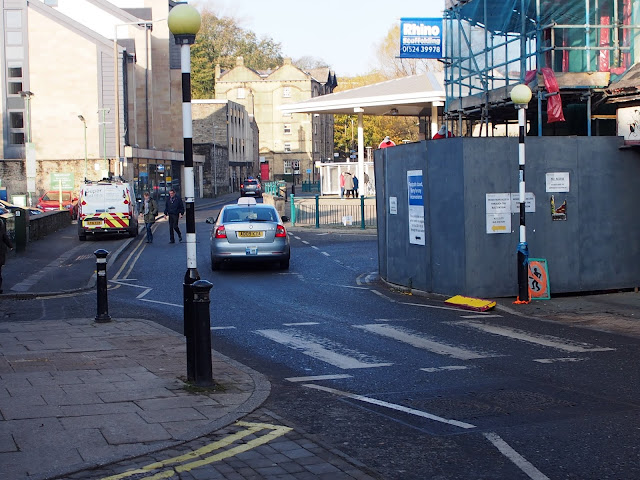 The Bus Users' Group continues to fight for the restoration of safe pedestrian access to Lancaster Bus Station almost two years after the original safe walking route was blocked. Stalled building work at the corner of Wood Street and Damside Street has led to the previous safe route, via pedestrian crossings over the two roads, has been rendered impassable by hoardings erected by the contractors to the developers on the site.

The Group first raised the matter way back in September 2019. At that time, the County Council, which is responsible for highways, said that it was a planning and development issue and therefore the responsibility of Lancaster City Council. The City Council, however, merely confirmed that the work had planning permission and said that safety problems on the highway were for Lancashire County Council to sort out!  What appears to have been lacking, as is so often the case under the current "two-tier" system of local government is that no co-ordination between the two authorities seems to have taken place to ensure that bus passengers needs were taken into account before planning permission was granted.

After the BUG's call for action (read about it here) in January this year a set of temporary traffic lights appeared outside the bus station in the obvious place to site a pedestrian crossing. Whilst we would have been satisfied with a bit of black and white paint on the road we were happy that our concerns appeared to have been listened to.

But it seems that the council was hiring-in the equipment from its own contractor and intended to recharge the cost to the site developers. When in March they belatedly realised that they had gone into receivership and were not in a position to pay the council took the traffic signals away again!

Council fails to understand the problem.

Our Group is fortunate to have amongst its membership a number of city and county councillors and it was two of the latter who now took up the cause.  Firstly, Lizzi Collinge, (Labour member for Lancaster East), attempted to find out from the Council's Highways Regulation and Enforcement Manager what he proposed to do about the problem. The response she got made it clear that the Highways Department does not understand the issues.

Because the hoarding blocks the pavement on the north side of Damside Street the Council officers take the view that the problem only concerns the small number of pedestrians who approach the bus station on that side of the road, having come from the direction of North Road.  Because they can use the existing zebra crossing, which is "clearly signed" to cross the road and continue towards the bus station on the south side of the street it seems the council thinks they have no problem, even though they then have to re-cross Damside Street to get into the bus station.

It overlooks the fact that the overwhelming majority of passengers already use the south side of Damside Street, having come from the city centre via Cheapside. These passengers had a safe walking route over the crossing to the north side of Damside Street and via a second crossing over Wood Street to reach the bus station. Not only was this route safe it was also accessible and avoided the crossings of Caulkeld Lane and a yard entry that can be difficult for wheelchair-users and other mobility-impaired people.

Eventually the Highways Department agreed to send an inspector to look at the problem, but the only action that followed was yet another sign on the hoarding to say that the pavement was blocked (by the hoarding is was affixed to!) and a spoonful or two of tarmac to ease the crossings of Caulkeld Lane and the yard entry for less ambulant people.

County Councillor Gina Dowding (Green Party, Lancaster Central) then took up the issue and sought an on-site meeting with the Highways Department to allow us to explain the problem. This was refused because, due to Covid-19 the council had a ban on face-to-face site meetings. However, a second request for a meeting via Zoom or similar was then turned down as follows:

I ... feel that we have exhausted all options within our remit for the safe passage of pedestrians. I understand the proposals put forward do not satisfy the requirements of the Bus User group (sic), however, we do not have the facility or resources to have the hording removed or implement controlled crossings at the location. Therefore, I do not believe we could satisfy the groups (sic) requirements if a meeting was to be held. We had contacted the developer on previous occasions, who cannot now assist as they are now in receivership. We have put in additional signs and ramps to assist pedestrians. The development had planning consent, and it was an unforeseen consequence that has placed us in this situation. Unfortunately, I feel I would be wasting peoples time in attending a meeting, as the county council do not have the authority to move things forward." (Phil Steed, District Lead Officer, Highways Dept.)

The continuing situation also affects Stagecoach who, as operators of the bus station, are responsible for its safe running. The company has had to employ a member of staff to supervise entry of buses via Wood Street due to visibility problems caused by the hoarding. To minimise the extra cost the entire Wood Street side of the station is closed at less busy times and buses are relocated to the opposite platform although the signage at stands doesn't reflect this and even the more flexible electronic display has not been re-programmed. Needless to say, these extra costs will be met by bus passengers in the long run through higher fares.

Where do we go from here?

As the developers of the site are reportedly in receivership there will not be a quick or easy resolution to this problem. Although this year the number of passengers using the bus station has been reduced due to Covid-19 ridership has been improving and will continue to do so when the current lockdown ends.

The Group finds the statement (above) that  "...the county council do not have the authority to move things forward.",  when what is required is work on the highway for which the council is itself responsible,  completely unacceptable.

We will continue in our campaign to restore a safe and accessible pedestrian route between the city centre and the bus station. 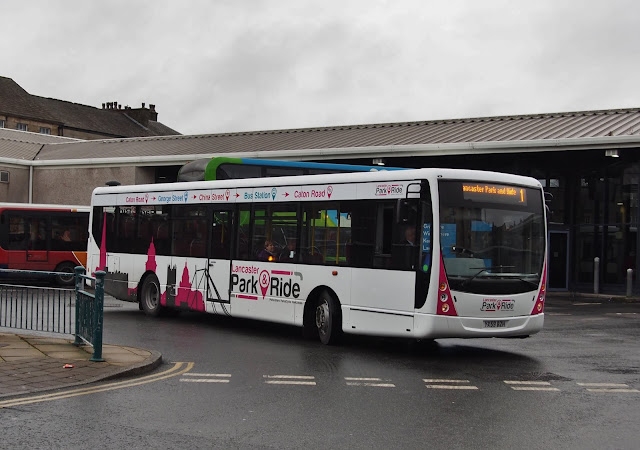 Kirkby Lonsdale Coach Hire has announced that the Lancaster Park & Ride service that links Caton Road Park & Ride site at Jc 34 of the M6 with the city centre will be suspended for the duration of the forthcoming national lockdown in England.

The last journey will be at 19.35 from the Bus Station on Friday, 6th November and the service will restart when lockdown is lifted, which is expected to be on Saturday 3rd December "at the earliest"!

The Park & Ride site itself will remain open and will continue to be served by buses on service 582 between Lancaster and Kirkby Lonsdale.

CHANGES IN DECEMBER 2020
Lancaster Park & Ride service will resume on Wednesday, 2nd December.
From 12th December "University Holiday" timetables will be introduced on services 1/1A and 4/4X. These are expected to operate until 8th January 2021 (to be confirmed)
Christmas & New Year
Changes to timetables can be expected on all services between 24th December 2020 and 2nd January 2021. Details will be posted as soon as they are available.
Temporary Service Changes (Stagecoach only)

The next meeting of the Bus Users' Group is on Thursday, 26th November at 14.45hrs. The meeting is being held by Zoom. Members should have received a link to allow them to join.
FIND US ON FACEBOOK
Our Facebook Page